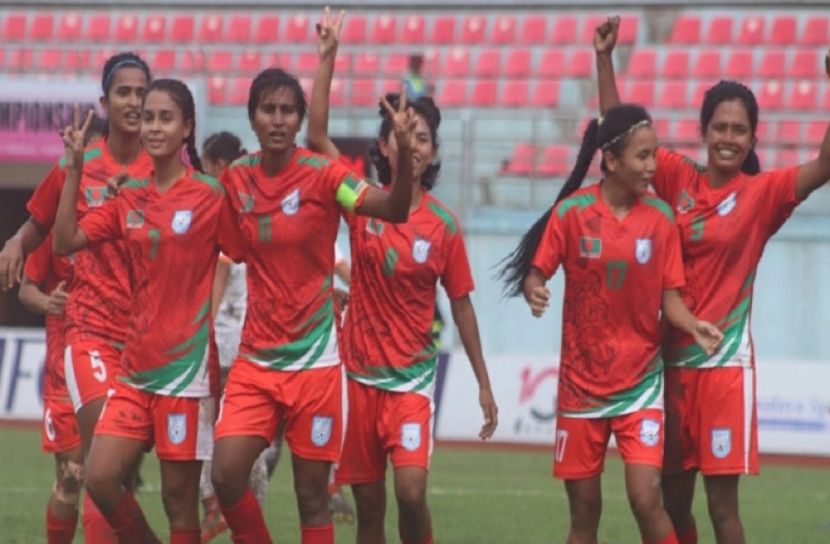 Sports Desk: Bangladesh beat Bhutan by 8-0 goals in the semifinal of the SAFF Women's championship in Kathmandu of Nepal on Friday.

Sabina Khatun, Krishna Rani Sarkar, Rituparna Chakmara left the field with a victory of 8 goals by scoring 4 goals in the first half of the match and another 4 goals in the second half. As a result, Bangladesh women's team reached the SAFF final for the second time.

Bangladeshi girls were confident of winning against Bhutan in the first semi-final of the tournament in Kathmandu.

In the entire match, Bangladeshi girls played football with dominance. Bhutan could not test Bangladesh's defense even once.

Bangladesh scored first goal from the first attack of the match. In the second minute, Sirat Jahan took a pass from the midfield and beat goalkeeper and put the ball into the net.

Sabina scored her second goal in the 53 minute to lead Bangladesh 5-0. In the 57 minutes, when Sabina's free kick escaped the Bhutan goalkeeper, Masura Parveen sent the ball into the net with a soft shot to make the difference 6-0.

Badli Tahura scored in the 88 minutes to make the margin of victory 7-0. Captain Sabina Khatun completed her hat-trick in injury time and won the team 8-0.

Bangladesh scored 20 goals in four matches in this tournament. They defeated Maldives 3-0, Pakistan 6-0 and India 3-0 in the group stage and reached the semifinal.

India and Nepal will meet in the second semifinal in the evening today. Bangladesh will fight for the title against the winning team on September 19.