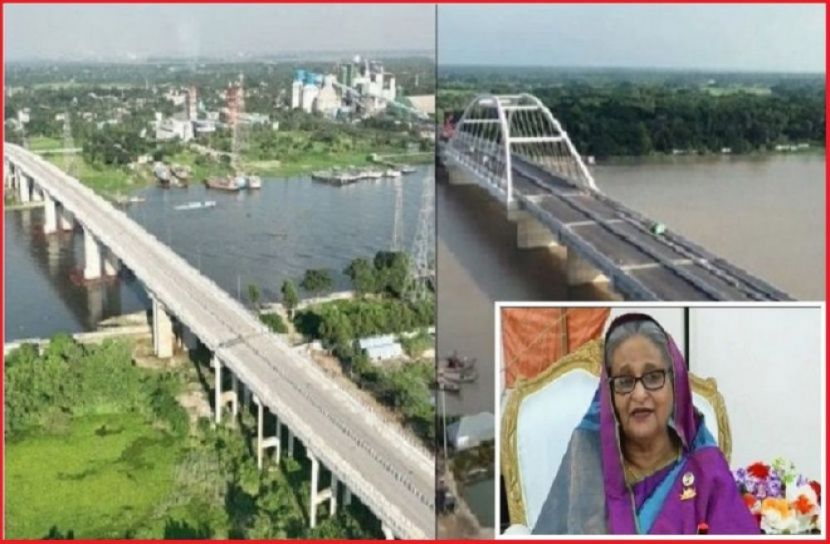 She opened the two bridges through video conference from her office on Monday.

Prime Minister said, the bridges will help boost the country's economy alongside making the road communication easier, faster and cheaper by cutting the travel time.

Read more: EU to give 6 million euros for Rohingyas

However, both bridges will open tor traffic from Monday midnight according to the Road Transport And Highways Division.

The 690-meter-long Madhumati Bridge has been constructed at a cost of Tk 960 crore with the funding of Japan International Cooperation Agency (JICA), which is locally known as Kalna Bridge. However, the 27.1 meter wide bridge has six lanes including four high speed lanes along the 4.30 km approach road and two service lanes. It connects Narail, Gopalganj, Khulna, Magura, Satkhira, Chuadanga, Jessore and Jhenaidah districts.

Locals said, on this occasion, colorful flags have already been planted on both sides of the road. At the same time, millions of people in south-western region including Narail, Jessore, Benapole are waiting for the opening of the bridge.

According to the project officials, with the opening of this bridge, the people of southwest region will get fast road connectivity. Because the bridge will reduce the distance from Kalnaghat to the capital Dhaka by more than 100 km.

Shahidul Islam Milan, Former President of Jessore Chamber of Commerce and Industries, said the Madhumati Bridge will strengthen the economy of the region and greatly facilitate road communication. And the economic activities of Benapole land port, Mongla sea port and Nawapara river port will increase manifold.

On the other hand, the third Shitalakshya Bridge is named after the brave freedom fighter AKM Nasim Osman. The length of the bridge is 1.29 km.

EU to give 6 million euros for Rohingyas